The Victorian Quilters Inc ‘Fabric of Society’ Challenge was held in Melbourne as part of the Quilt and Craft Show held in July 2011. The challenge was to make a quilt that is inspired by, recreated from, or adapted from any quilt as published in the book – ‘Fabric of Society – Australia’s quilt heritage from colonial times to 1960’s’ by Dr Annette Gero. The quilt that I selected to recreate was made in 1857 by Prudence Jeffrey on board the sailing ship The Phoenix to Australia. Prudence, and her husband of 2 years James, set sail from Liverpool, England on 14th June 1857 and arrived in Melbourne on the 26th November 1857. I worked on my version of Prudence’s quilt for just over 13 months, spending approximately 1300 hours working on it. There are 17,977 hexagons in the quilt each measuring ½” in diameter or about ¼” along each side. The quilt measures 210 cm from point to point.

Entries for the challenge were received from all over Australia and were judged by 3 judges including Dr Gero. My quilt, which I named ‘Dear Prudence’ won ‘Best Quilt’ and also won ‘Best in Show’ for the Challenge. It was a great honour to win and I was able to share the day with my 2 daughters - Emma & Hannah, my sister Cathryn and many friends who made the trip to Melbourne for the presentation. My prizes included a Brother Sewing Machine, $2,000 prize money, a beautiful collectable sewing machine music box, fabric, $100 voucher, rosettes and certificates. The quilt was on display in Melbourne for the four days and generated a lot of interest. I have had emails and messages from all over Australia, New Zealand, USA and Canada. Brother International Australia sponsored the challenge.
In 2012 I decided to write the pattern booklet for my quilt. I have sold many copies to people all over the world. It is available for purchase.
‘Prudence’ is currently on display at Gum Valley Patchwork. 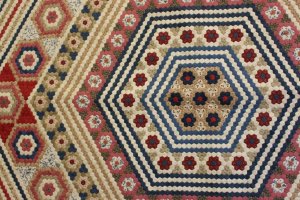 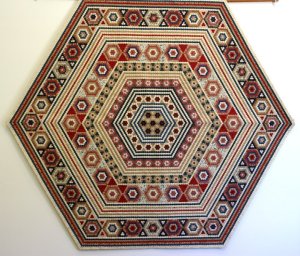 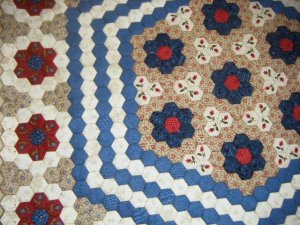 Original design by Linda White (me!) named after my Maternal Grandmother and my Mother.
22,437 1/4" hexagons. Took me just over 2.5 years to make.
Pattern booklet available. 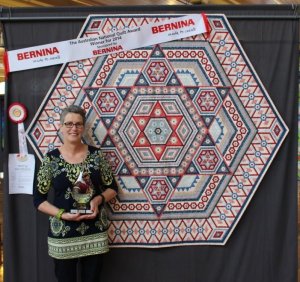 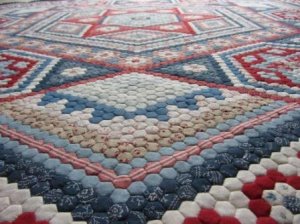 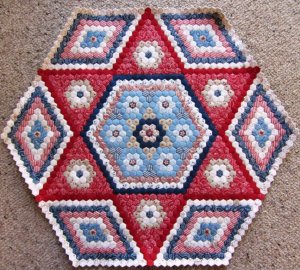 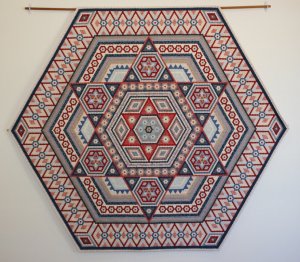 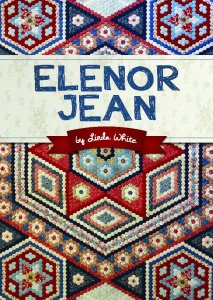